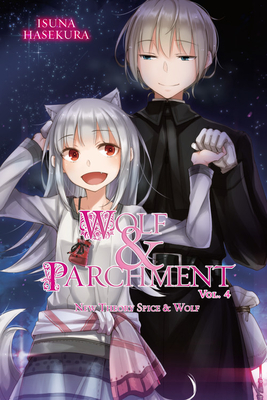 Rausbourne, Winfiel Kingdom's second-largest city, is on the verge of boiling over. Col and Myuri have come to this bustling metropolis at Heir Hyland's request-but as soon as they land, they find themselves caught between heavily armed tax collectors and mercenaries hired by the local merchants association. The stakes are high when it becomes clear that Rausbourne's troubles are simply one part of the wider conflict between the Kingdom and the Church, which has actually worsened due to Col's deeds as the Twilight Cardinal.
If nothing changes, it'll be only a matter of time before fighting breaks out. Right as things start to look their bleakest, Lawrence's old archrival Eve Bolan offers a convenient lifeline. Will the fearless miser turn out to be friend or foe? Either way, Col has no choice but to dive into a three-pronged standoff between the Church, the Kingdom, and the merchants!

Isuna Hasekura's debut novel, SPICE AND WOLF, earned the Silver Prize in the 2005 Dengeki Novel Prize with the series going on to total seventeen novels and both manga and anime adaptations.