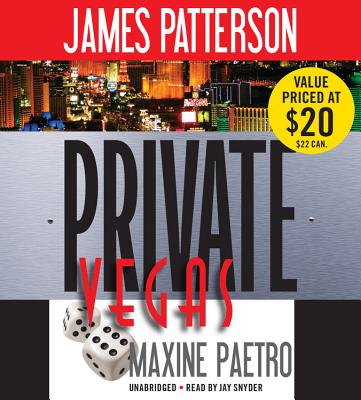 
Las Vegas is a city of contradictions: seedy and glamorous, secretive and wild, Vegas attracts people of all kinds--especially those with a secret to hide, or a life to leave behind. It's the perfect location for Lester Olsen's lucrative business. He gets to treat gorgeous, young women to five-star restaurants, splashy shows, and limo rides--and then he teaches them how to kill. Private Jack Morgan spends most of his time in Los Angeles, where his top investigation firm has its headquarters. But a hunt for two criminals leads him to the city of sin--and to a murder ring that is more seductively threatening than anything he's witnessed before. PRIVATE VEGAS brings James Patterson's Private series to a sensational new level.

James Patterson has had more New York Times bestsellers than any other writer, ever, according to Guinness World Records. Since his first novel won the Edgar Award in 1977 James Patterson's books have sold more than 300 million copies. He is the author of the Alex Cross novels, the most popular detective series of the past twenty-five years, including Kiss the Girls and Along Came a Spider. He writes full-time and lives in Florida with his family.

Praise for Private Berlin:
"Patterson has always been an expert at conceiving chilling villains of his many pieces, and with Sullivan, he achieves new heights of terror....Private Berlin will make you a fan of this wide-ranging and marvelously conceived series, if you are not one already."--Bookreporter.com