The Law of Innocence (A Lincoln Lawyer Novel) (CD-Audio) 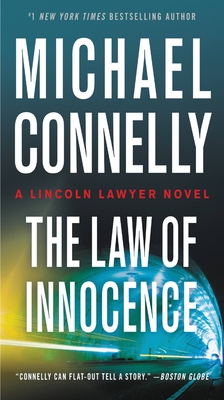 On the night he celebrates a big win, defense attorney Mickey Haller is pulled over by police, who find the body of a former client in the trunk of his Lincoln. Haller is immediately charged with murder but can’t post the exorbitant $5 million bail slapped on him by a vindictive judge.

Mickey elects to represent himself and is forced to mount his defense from his jail cell in the Twin Towers Correctional Center in downtown Los Angeles. All the while he needs to look over his shoulder—as an officer of the court he is an instant target, and he makes few friends when he reveals a corruption plot within the jail.

But the bigger plot is the one against him. Haller knows he’s been framed, whether by a new enemy or an old one. As his trusted team, including his half-brother, Harry Bosch, investigates, Haller must use all his skills in the courtroom to counter the damning evidence against him.

Even if he can obtain a not-guilty verdict, Mickey understands that it won’t be enough. In order to be truly exonerated, he must find out who really committed the murder and why. That is the law of innocence.

In his highest stakes case yet, the Lincoln Lawyer fights for his life and proves again why he is “a worthy colleague of Atticus Finch... in the front of the pack in the legal thriller game” (Los Angeles Times).

Michael Connelly is the author of thirty-four previous novels, including the New York Times bestsellers, Fair Warning, The Night Fire, and Dark Sacred Night. His books, which include the Harry Bosch series, the Lincoln Lawyer series, and the Renée Ballard series, have sold more than seventy-four million copies worldwide. Connelly is a former newspaper reporter who has won numerous awards for his journalism and his novels. He is the executive producer of Bosch, starring Titus Welliver, and the creator and host of the podcast Murder Book. He spends his time in California and Florida.

Praise for The Night Fire—-

"Connelly is the
Raymond Chandler of this generation, and readers will be studying his writing
methods decades from now. He has created another novel that feels authentic on
every level, and the underlying theme of mortality running through the
narrative makes everything in the story more urgent."

"There's something for everyone in this jam-packed
plot: murder, arson, professional rivalry, salty cop talk and noisy domestic
disputes that turn very ugly very quickly. Me, I go for the procedural details:
who does what and how things get done from the minute the cops on shift at the
Hollywood Division are sent to investigate a murder. Connelly is pretty much
the current dean of procedural writers."

"Breathless action...deep character studies...The Night Fire is Connelly's twenty first outing with Bosch, but the author has so much more to show us about him. Only three books in, Ballard has even more fodder for Connelly to uncover. In The Night Fire, Connelly again shows his mission: strong plots and sturdy characters."—Oline Cogdill, Sun Sentinel

"A virtuoso performance...The Night Fire glows with the instincts and intelligence Bosch and Ballard bring to their pursuit of the truth."—Collette Bancroft, Tampa Bay Times

"One of the
greatest crime writers of all time...Connelly continues to deliver winner after
winner, year in and year out...reading one of his books is an
experience unlike anything else the genre has to offer."

"Connelly
is without peer when it comes to police procedurals, and once again proves that
he's the modern master of the form."

"Remarkable narrative legerdemain...Not only has Connelly created another fully formed series lead in Renée, who has her own fascinating backstory, but he has also forged a fascinating yin-and-yang relationship between the old school Harry and the unconventional loner Renèe...Master chef Connelly has once again combined familiar ingredients into a new and completely satisfying dish. Connelly is on a roll, with three consecutive number-one New York Times bestsellers. Don't bet against number four."—Bill Ott, Booklist (starred review)

"Connelly
manages to top himself with his latest intensely gripping thriller...He
tells a superb tale with an economy of words using a no-nonsense,
fly-on-the-wall style of writing...Fans of this prolific author of crime dramas
and either series will find this best-seller-list-bound novel hard to put down."