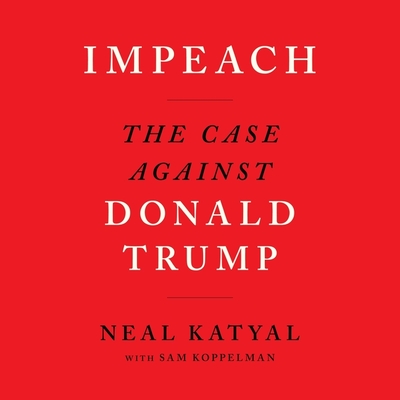 Why President Trump has left us with no choice but to remove him from office, as explained by celebrated Supreme Court lawyer and former Acting Solicitor General Neal Katyal.

No one is above the law. This belief is as American as freedom of speech and turkey on Thanksgiving—held sacred by Democrats and Republicans alike. But as celebrated Supreme Court lawyer and former Acting Solicitor General Neal Katyal argues in Impeach, if President Trump is not held accountable for repeatedly asking foreign powers to interfere in the 2020 presidential election, this could very well mark the end of our democracy. To quote President George Washington’s Farewell Address: “Foreign influence is one of the most baneful foes of republican government.” Impeachment should always be our last resort, explains Katyal, but our founders, our principles, and our Constitution leave us with no choice but to impeach President Trump—before it’s too late.

NEAL KATYAL is the Paul and Patricia Saunders Professor of Law at Georgetown University and a partner at a law firm where he leads one of the largest U.S. Supreme Court practices in the nation. He previously served as Acting Solicitor General of the United States (the government’s top courtroom lawyer). He has argued more Supreme Court cases in U.S. history than has any minority attorney (39 in total), recently breaking the record held by Thurgood Marshall. American Lawyer magazine recently named him the very top litigator of the year nationwide and the Justice Department awarded him the Edmund Randolph Award, the highest award the department can give a civilian. A frequent contributor to MSNBC and the New York Times, he has been named one of GQ’s Men of the Year and has appeared on virtually every major American news program, as well as House of Cards, where he played himself.

SAM KOPPELMAN is a senior speechwriter at Fenway Strategies, where he’s written for public officials, philanthropists, business leaders, and organizations working to make the world a better place. He has also been a speechwriter to former New York City Mayor Michael Bloomberg, and has written under his own name for publications including The Boston Globe and Harper's Magazine. Koppelman holds a B.A. in government from Harvard College, where he was named a John Harvard Scholar and worked as Op-Eds Editor for The Harvard Crimson.

“A veteran Supreme Court lawyer presents the case for impeachment in a manner that adheres to the facts and the law without engaging in political spin . . . Essential reading for a key moment in our (currently) democratic nation.”
—Kirkus Reviews, starred review

"As concise and evenhanded a summation of the accusations currently weighing on the president (and the nation) as one can find between two covers."
—Washington Post